For the first time in our trip we didn’t have to dismantle camp on the morning of day four. At the end of the day we were to come back to this beautiful campground in Artavan, with a view on the forested side of the mountain, which also meant that our packs were going to be lighter, and our tents would have a chance to dry up in the morning sun after the electric storms of the night before. Also, someone was paranoid that inquisitive horses and cows might have trampled them down to oblivion, but we could only hope that we wouldn’t have to experience that …again, as we did last year. Spoiler alert: no tent was harmed.

With the day all for ourselves we decided to go out an play. We only had a destination in mind, a turnaround point, and nothing more planned. It was a great plan. We chose to walk up the valley towards the Andranik fortress, deliberately staying away from the blazed trails, just to test our navigation skills, and to see if we could enjoy a different path towards the fortress high up above the Hayeli lake.

We ended up crossing over a large abandoned settlement called Mayradurk, or Maratuz, full of ruins, khachkars, and even a little shrine with allegedly holy water that we would check out on the way back.

We sort of followed a ridge in between both marked trails, that were circling around us more widely in the side valleys, as we finally approached the lake with the famous world map in it. This way gave us a chance to step through what must have been the old village’s paths, maybe even staircases, walking along walled paths that were taking us through the scattered ruins of what one day must have been a village full of life.

We had plenty of time to practice taking our bearings, trying to locate ourselves by looking at the topography and confirming the position with the compass reading, and in general brushing up half-forgotten skills at a leisurely pace. Because it’s not just about getting to the destination and back, but also about having fun in the mountains, isn’t it?

So here we were, trying to figure out why one particular point, the Ptkasar peak, was consistently giving us the wrong reading on the compass, we still are unsure if it was some sort of interference, or maybe we were pointing at a false peak, where the one we were looking on the map was hidden… to be honest I still don’t know, but other cliffs and hills were reading correctly, and navigating with the topography was also confirming that we were we thought we were. Go figure.

The views from Andranik Fortress were otherworldly. Beside the best look at the world map within the Hayeli lake – …can you see it?! Can you believe it!? – on the opposite direction we could also literally see the doors into the province of Syunik, the unfortunately infamous Amulsar mountain, and even a hint of Jermuk’s valley.

We stopped for lunch up there, taking in the beautiful landscape from that stunning vantage point; I really urge you to check it out; just watch out for these guys on your way there… Using walking sticks to notify snakes of your presence is highly recommend, across Vayots Dzor, especially so.

After all the geeking out about maps and topography, the fact that Tsovinar was still actually having fun navigating by map and compass became obvious when she enthusiastically proposed to organise a “treasure hunt” up this valley.

We must admit that the terrain is favourable to this kind of things, so when we started describing orienteering (the way some people call these kind of topo-friendly treasure hunts) she seemed convinced. Let’s see, it could be a fun event to plan for sometime in the future, a few days of learning map-reading skills, and applying them to find little treasures scattered across a nice valley with plenty of views… we shall see…. would you like to take part if we were to organise something like that? 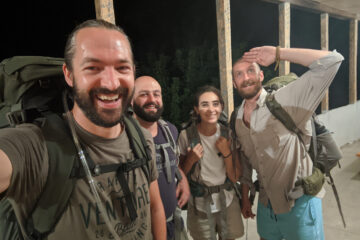 This little adventure is coming to an end today: we are wrapping up the stories of our journey through the Vayots Dzor trail network around Gomk, Martiros and Artavan, and also the promotional campaign for Read more… 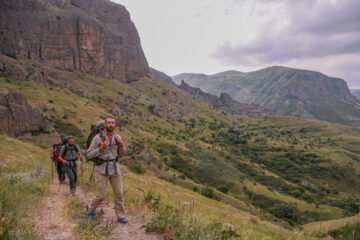 On day 3 we left the village of Kapuyt aiming for Artavan, the main village on the next valley to the north. To reach the blazed trails that would get us across the mountains, we Read more… 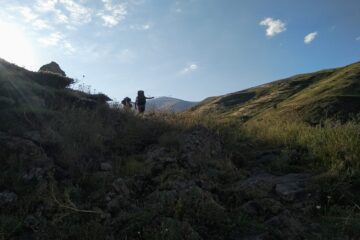 We had an early start on day 2, as we headed up an ancient trail climbing above Rock-Hewn Martirosants towards the Martiros Waterfall. It was a wide trail, enough to possibly be a caravan route. Read more…