Breaking radio silence: how did the mapping workshops go?

Hello people, as we concluded the latest chapter in the Cartisan’s  journey, we think it’s time for an update:

For the past eight weeks Simon and I have been touring all the TUMO centers in this part of the world, to deliver our Open Mapping Workshops.

In case you needed reminding, we offered that during our campaign for the Dilijan Hiking Map, and since people did indeed pledge for it, we got a chance to fulfill our promise by meeting and working with 55 teenage students. Our objective was to teach them how to contribute to OpenStreetMap (OSM), aka “the Wikipedia for maps”,  which is the open geo-spatial database we rely so much upon for our mapping work.

So, how did the workshops go?

All in all, I am happy to report that it has been a very interesting experience, for us and hopefully for the students too. It’s been rewarding, intense at times, and surely very different from what we do on a daily basis, so I am glad we went through with it, and grateful for the opportunity that you, and TUMO, gave us.

With our course we always begun by deconstructing and rebuilding the concept of “what a map is”, to break some common assumptions and trying to broaden up the students’ horizons about what a map is and can do.

Only after that, we begun focusing our attention towards geographical maps, and actually worked towards mapping around areas familiar to the students, using OSM, to improve both the data quality and quantity.

Practically, this meant that every student would choose an area to work on using a task manager that we set up for them (that example was for Stepanakert), starting with three simple tasks; using satellite imagery, we asked the students to

Little side note: kudos to the Humanitarian OpenStreetMap team for developing the taskmanager, and for TeachOSM for letting us create our projects on their servers!

Quickly the work went beyond those three tasks, as students figured out how to map other elements outside that list, by using the master reference that all OSM-editors shall use: wiki.openstreetmap.org, commonly referred to as “the bible“. Some students even spotted a gap in the documentation, as the way to tag boarding schools didn’t seem to have an entry: time to propose a new tag?

Every workshop ended with a group project that students themselves chose, usually resulting in identifying a theme for a certain map they wanted to produce, selecting the information that they wanted to highlight on such map, going on and mapping those features into OSM both using satellite imagery (remote mapping) or going out to collect GPS notes (field mapping), and some even designed the map style itself. We also collected statistics on the amount of changes produced for each workshop in the two weeks of work.

The first group of students in Dilijan was also the smallest one. It was perfect to test how our material was being received, and adjust it when needed, with kids who seemed eager to get on with something so new for them.

Because their surroundings were well mapped already – ahem – we chose to concentrate our work in areas north of the Dilijan National Park, where the Transcaucasian Trail route is planned to continue on it’s way to Georgia. We also spent some time outside, mapping as many of the local shops we could across Dilijan town, which quickly turned into a game, more than work really, but it was fun and we got something done so nothing to complain.

At the end of those two weeks, beside the actual improvement to the map (examples here and here: click and drag left-right to see the before/after effect!) we saw some teary eyes and lots of jokes flying around as we were heading out of TUMO, so I believe we could call it a successful start. One of the two maps they produced was a collection of useful places for students like them, like libraries, book stores, different kinds of school, and public places where they could do some sport; the second was a detailed map of the shops across central Dilijan.

The Dilijan crew after their presentation, which even included a small play!

Next was the time of the hard working and hyper-competitive students of Gyumri, who just decided to take it upon themselves to make sure their town’s map was going to shine after their were done with it. And shine it did.

It was hard keeping them off the mapping tasks, and they were always showing up early at classes. It wasn’t always smooth of course – we are talking about teenagers after all – but in the end I can say both sides were happy. We were definitely impressed about what they achieved: about 9000 new buildings mapped in a previously sparsely mapped city centre, and tons of local knowledge helped us adding local business and attractions throughout the whole city. See for yourself here, it is quite remarkable!

The students chose to package an “Insider map of Gyumri”, including all their favourites spots that they would recommend visitors to check out. We did our best to follow their advice ourselves!

Third came Yerevan, and a group of very talented students. It was obvious from the start that this was going to be a different workshop: being part of TUMO Yerevan, and even by simply living in the capital, it felt like they were already overwhelmed with opportunities. So they were curious for sure, but also more challenging to engage; in the end this basically meant that the subset of actually interested students ended up showing us quite a different level of work-independence and maturity.

This was especially true when it came to their final project: their choice was, first of all, ambitious for sure, but also sensible, so we decided to give it a go and mapped all the bus and minibus routes that were passing by TUMO. It might sound trivial, but it isn’t so simple at it sounds to add this information to OSM for new mappers.

We may had been a bit overconfident, but in the end, lead by a hardcore group of students, we managed to pull it off: now the Yerevan city map has 12 new public transport routes added to OSM, which are even usable for getting directions around town with popular apps like OsmAnd or MAPS.ME!

You can also see every public route, including the 12 we worked on, highlighted on this “Open Public Trasport Map” (you’ll need to browse to Yerevan manually, sorry about that…).

It took a very long day of field mapping (involving actually sitting on a bus with a GPS tracker on, taking geo-referenced notes), and all sort of hilarious stories came back for us as a byproduct as well as the useful data we were after. We then helped them to process that information with a long evening push, and in the end the students even made a printable version of these 12 routes, complete with their own custom design, which was pretty beautiful.

The Yerevan crew under a massive projection of their “TUMO Public Transport” map.

Stepanakert was a mix of all the above: very quickly the students made us go through all of our material, picking up what they wanted faster then we expected, but also, not being shy to say no when the weren’t interested and wanted to move on.

The area they worked on was basically a corridor following another important long-distance hiking trail, called Janapar Trail, since once again the city was already well mapped, but also because the trail is itself a popular international tourist attraction, receiving visitors from all over the world, but still lacking detailed mapping (although GPX traces are available for navigation by smartphone).

For the final project, once again we saw the students splitting into groups taking ownership of different parts of the work, and just like in Yerevan, they made a practical choice: a major international football competition is about to arrive to Stepanakert this June, so they decided to make a map tailored to the football supporters that will soon visit their town.

We sometime felt that some of the student might have gotten a bit lost in this process, moving at different speeds, but in all honesty, I must admit it could have been also because for us it was becoming a little harder to maintain high motivation for the whole group.

The map they produced in the end was a well designed foldable brochure ready to be distributed. The students in fact contacted the organisers of the competition and even offered it to them for free, so let’s see if they will pick up on their offer. From a product design point of view, I think they did a good job in such a short time.

The Stepanakert crew and their foldable map for football enthusiasts. Completely designed by them.

Most important of all, for me at least, is been the opportunity to meet so many people, some of which where undoubtedly interested and interesting, and also having the chance to slowly visit three new cities. In Armenia, I never lived outside Yerevan before, so having a chance to taste the vibe of the people living outside the capital was interesting in itself.

When it came to mapping, we always expected that only a small percentage of the students could be interested in sticking around the OSM community after the workshop was over. We’ll see now how small that number will be.

We are in fact working already to figure out ways to keep these kids in the loop, but all ideas are in their infancy as I write this… Obviously there is plenty of mapping to be done, and it could be done from anywhere, so if they’ll choose to get back to action, we’ll be more than happy to support them. The ultimate success would be if some of them could join our team in the future, really, so let’s see…

In any event, it’s been a good eight weeks of mapping and exploring, and we even got to do some hiking ourselves! Especially beautiful was our outing along the Janapart Trail, which was a nice treat and a highly recommended hike; the scenery climbing up and down the – unpronounceable – Kachaghakaberd , as well as the trail itself, were simply world class, but less crowded!

The stunning, yet unpronounceable, Kachaghakaberd peak.

Wild flowers in the lowlands

We’d like to once again thank TUMO for opening their doors to us, and letting us meet their students, and thanks to those students too, for the memories, the laughter, and all then went on during our time together. And thanks again to the backers who made this possible!

Wrapping up the Dilijan Map Campaign!

Hello dear backers and supporters, it’s been a long time. I hope you are all coping well with the pandemic, and are making the most of this unfortunate situation. I guess you too might be Read more…

The posters are out!

Hello people, As you might have already heard, the Posters / Maps of the hiking experience across Armenia have been printed at last, and we are getting ready to send them over! For the ones Read more… 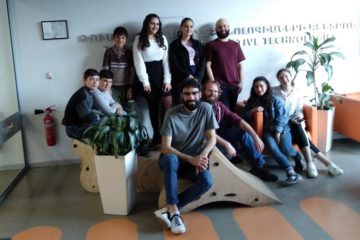 It’s been a bit quiet in the last two weeks, isn’t it? Well, only on the web! As you’ll remember we promised to arrange workshops to introduce Armenian students to mapping using OpenStreetMap, so here Read more…